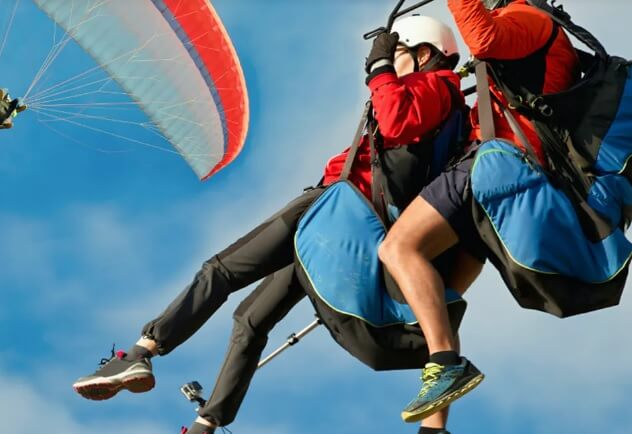 To fully understand the wing loading, I often ask this question when I discuss the mechanics of paragliding flight:

Obelix and Asterix fly under the same paraglider (same size), who goes the furthest? The wing loading is a ratio between the PTV (total flying weight) and the area of the wing.

It is therefore expressed in kilogram / m2.

The average wing load of a solo paraglider is around 3.5 kg / m2.
If you fly in a two-seater, the wing load is then greater, around 5 kg / m2… and you can feel it in the controls, particularly if the passenger is heavy!

In delta, it is even higher, from 5 and up to 10 for the most efficient models.
The reason is simple: at the same weight of the pilot, the surface of the glider in hang-gliding is much less than in paragliding.
The hang glider creates less drag, so it doesn't need to create as much lift as a paraglider.

For a given PUL (Ultra light glider, therefore delta Where paraglider), the manufacturer establishes a weight range.
For example, for a given paraglider model and a given size, it could be 75-95 kg.

Depending on whether we are at the top of the weight range (here 95 kg) or at the bottom (75), the behavior of the wing will be different, because the wing load will vary, mainly due to the variation in weight. of the pilot.

If Obelix weighs twice the weight of Asterix, and Asterix flies at 35 km / h, what will Obelix's speed be, if he borrows his paraglider?

Let us recall two equivalences making it possible to obtain the RFA (Resultant of the Aerodynamic Forces):

We can therefore deduce that:

So, to come back to our Gauls, the difference in speed varies according to the variation in weight:
With Po = Weight of Obelix,
Pa = Weight of Asterix,
Vo = Obelix Speed,
and Va = Speed of Asterix

Conclusion: the speed of the sail varies with the square root (√) of its PTV

To note that all speeds increase, horizontal speed, like vertical speed (sink rate).
And as finesse is the ratio

Here we will take the fable "The oak and the reed" to explain the subject.

A pilot "at the bottom of the range" (of weight) will be like the reed: He will be more sensitive to turbulence, therefore his paraglider more inclined to close, but without too many consequences. Like the reed, it bends but does not break.

The one at the top of the range will suffer less from closures, but when they do occur, they will be more violent.
This is for two reasons. First, the internal pressure in the sail increases (with increasing speed). Then the more loaded pilot generally flies more braked, so as not to fall out of the sky. This results in a greater impact. These two factors explain that the sail is in this case less prone to collapses. On the other hand, they will be more violent for the same reasons: More speed, more inertia, largely negative impact ...

The more a paraglider is loaded, the more speed it will have ... horizontal, but also a poorer, greater sink rate. It's good to gain speed, but if you climb less well, and less high.

In general, we spend a third of the flight time in thermals, which leaves you wondering. In short, everything will depend on the conditions of the day.

It is often said that the heavier pilots have an advantage, because if Obelix flies with a wing adapted to his size (or rather his weight), he will fly better than Asterix with his smaller wing.

the reynolds number which partly depends on the surface exposed to the flow (wingspan * thickness of the profile), explains that a larger sail generally flies better. We can also say more simply that the induced drag decreases. This is notably due to the marginal vortices which form on the stabilizers, but as the “useful surface” of the sail increases proportionally, the lift increases, and therefore the finesse too.
This is how light pilots in competition ballast themselves to fly on a larger model… up to 33 kilos (22 in 2020). A real aberration!
But the "total flying weight" increases with the surface of the sail, the wing loading is therefore respected.

It is to fight against this injustice that Bruce Goldsmith created a specific competition: the BGD-Weightless, in 2020 in Roldanillo.

TO Valle de Bravo, in high season, the conditions are rather muscular: powerful thermals, fairly strong breeze, convergences, in general I take a little more ballast than usual to go paragliding, so I increase my wing loading.

In this article, we have therefore seen that the wing loading does not influence the trajectory (or little, as long as there is no wind), the fineness of the paraglider remains the same (Cf polar gears) and on the other hand, the behavior of the wing will be modified, and the piloting adapted accordingly. If you are having trouble judging your height to enter the final, this article may be of great help: Landing precision.

Paragliding pilot for more than 20 years, I am also the founder of this website.
Instructor at Grands Espaces paragliding school in Annecy (French Alps), I migrate to Valle de Bravo, Mexico, in the winter.
See you around ! Know more
And don't forget to click if you liked it: